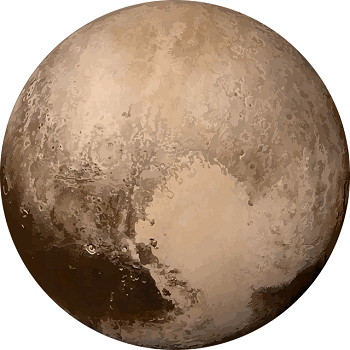 Most people have several doubts on why Pluto is not a planet anymore. The most asked among them are

2. Is Pluto Deviated from its path?

3. Is Pluto not orbiting the Sun?

All these doubts and presumptions on why Pluto is not a planet anymore will be explained in this article in a simple and lucid manner.

So, why Pluto is not a planet anymore?

Short answer: Pluto is not a planet anymore because it doesn’t fit into the new definition of Planets.

Based on their size, structure (shape), orbit (the path they travel), composition (what they are made up of), they are classified either as a Planet, Star, Dwarf Planet, Satellite, Comet or an Asteroid.

At Such General Assembly conducted in 2006, Pluto lost its Planetary Status when IAU redefined the definition of a Planet.

What is the need for new definitions?

Since the discovery of Pluto in 1930, Pluto has always been in debate. The reasons for this debate are

Pluto is the smallest planet in our solar system. Infact it is smaller than the Earth’s Moon.

All the inner planets namely Mercury, Venus, Earth and Mars which are not beyond the Asteroid belt are called Terrestrial Planets. They are called so due to their composition. All terrestrial planets have dense and rocky surface. While the outer planets which are beyond the Asteroid Belt are called Jovian Planets or Gaseous Planets because most of their surface is composed of gases such as hydrogen, helium and traces of methane. Jupiter, Saturn, Uranus, and Neptune are called as Jovian Planets.

In this Scenario, the next planet which comes after Neptune must be gaseous planet just like the other Jovian planets which are beyond the Asteroid belt. But Pluto in contrary is a terrestrial planet whose surface is dense and rocky.

Erratic Orbit of Pluto, Binary System of Pluto and Charon (its largest moon), and resemblance to Neptune are some factors which are debatable. Some scientists even think Pluto was once a moon of Neptune.

Near End to this Debate

This debate on planetary status of Pluto nearly came to an end on July 29, 2005 when group of Astronomers at The California Institute of Technology (Caltech) discovered a new trans-Neptunian object Eris which was found to be more massive than Pluto. This hinted the introduction of Eris as the Tenth planet into our Solar System. Astronomical community had to start a fresh debate on the status of these minor planets. Finally, there was a need for New Definition of Planet.

The long running debate finally came to an end on Aug 24th, 2006 when 2500 Astronomers at the 26th General Assembly for the International Astronomical Union passed two important resolutions by voting. They are

Resolution 5A: “Definition of ‘planet’ ”

Resolution 6A: “Definition of Pluto-class objects”

According to this new resolution 5A, there are three conditions for a celestial object in the Solar System to be considered a planet:

The first two conditions were fulfilled by Pluto since it orbits the Sun every 248years and it is massive enough to be near round.

But it failed to meet the requirement of third condition.

Astronomical observations of Pluto suggest that Pluto has not cleared its neighbourhood, which means there are still many objects which are not influenced by the gravity of Pluto and hence they do not fall into Pluto. For a celestial object to be a planet, it must have strong gravity to clear their neighbourhood.

If Pluto is not a planet anymore, then what is Pluto?

Now here comes the Resolution 6A which defines Pluto and objects similar to Pluto. According to this Resolution 6A, Pluto is called as a Dwarf Planet.

Therefore Pluto is not a planet anymore but Pluto is a Dwarf Planet.

Resolution 5B defines the requirements of Dwarf Planets.

4. The celestial object must not be a Satellite.

Since Pluto falls under this category, Pluto is a Dwarf Planet.

All Resolutions are listed in the official website of The International Astronomical Union.

Watch the Video in Telugu

Take the Complete Topic Quiz and test your Knowledge

1. Which international authority is responsible for the designating celestial bodies?

(a) International Council for Science (ICSU)

Why Pluto is not a planet