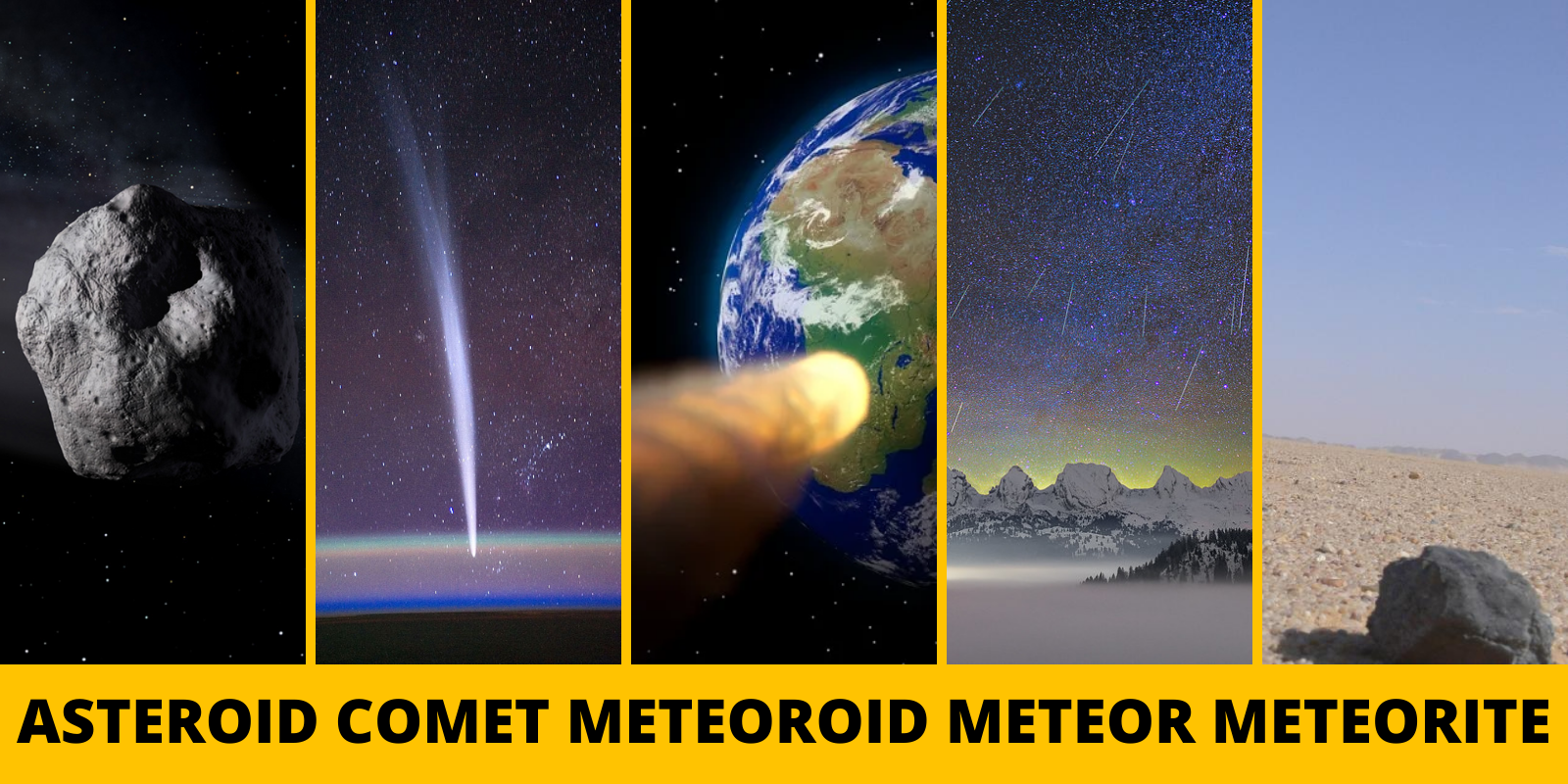 We have discussed about celestial objects in the article why Pluto is not a planet anymore. In this article, we will learn about the differences between Asteroid, Comet, Meteoroid, Meteor and Meteorite.

Our Solar System has 8 planets, 5 dwarf planets, more than 200 moons, and numerous space rocks. These space rocks are made up of different materials and have characteristic speeds and orbits around our Sun. Thus, we cannot say all the space rocks are the same just because they look the same from outside. In this article we will learn about the classification of space rocks in short as well as briefly about each of the space rock:

Comet: Comets are also formed from the residual of our solar system but far away from Sun where the temperatures are very low. These comets are made up of ice and dust. The most distinguishable part of a comet is its tail.

Meteoroid: When the fragments and debris of Asteroids and Comets come towards the Earth’s atmosphere, we call them as Meteoroids.

Meteorite: Meteors that didn’t burn up completely and fall on the Earth’s surface are called Meteorites.

About 4.5 billion years ago, there was a gigantic, rotating cloud of gas and dust which was called the Solar Nebula. As the gas and dust particles become closer and closer to each other because of gravity, the entire nebula spun faster and eventually become flat like a disc. 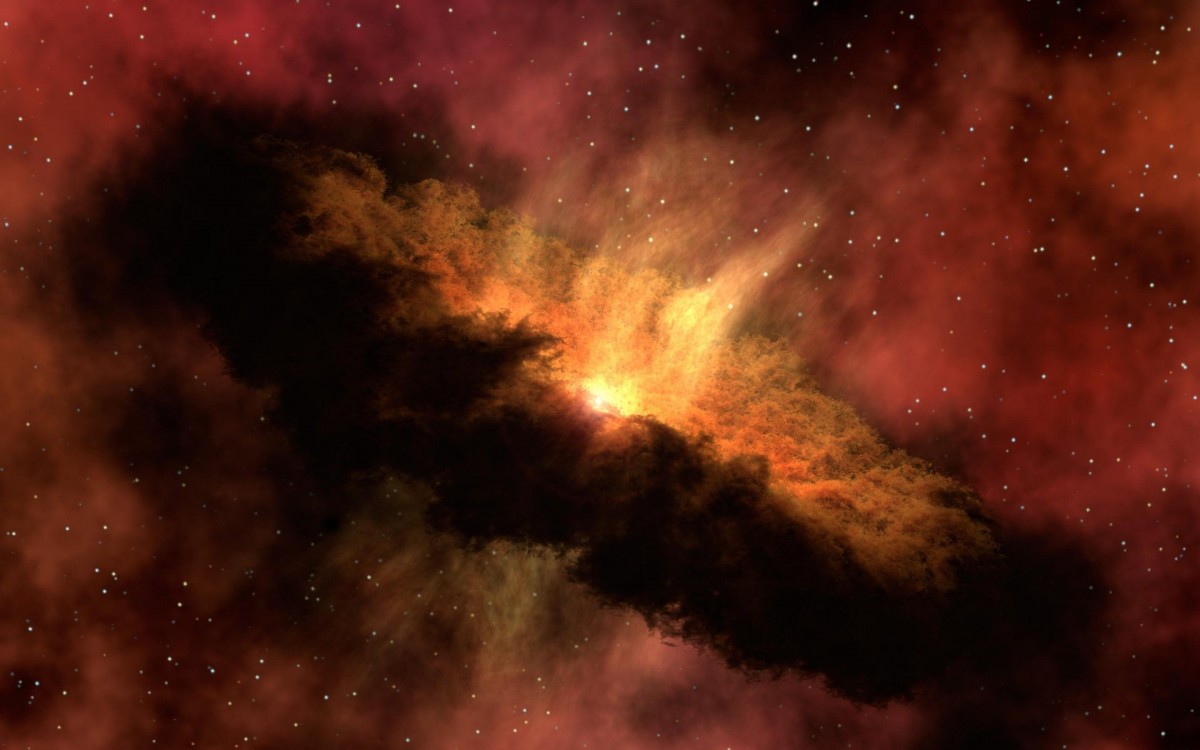 Finally, most of the gas and dust particles got pulled towards the center of the nebula to form our Sun which accounts for about 99.8% of the total mass of our solar system. The remaining particles which didn’t form the sun collapsed to form our planets (terrestrial and gas giants). Even smaller fragments of gas and dust that didn’t become planets or moons have become space rocks that we call them as Asteroids.

They are range from 900kms in diameter to less than one kilometer in diameter.

Comets are formed in the region far away from the Sun, typically beyond the planet Mars. This region beyond Mars is termed as snow line or the frost line, where the temperatures are very low. Thus, comets are made up of ice and dust.

Comets have a very thin atmosphere around them called Coma which is made up of dust and gases. When the solar radiation pressure and the solar winds exerted their force on the Coma of a comet, it causes the comet to have a tail. The tail of the comet ejects dust and gas particles into space which always points away from the Sun.

Comets are believed to be originated from two sources:

The comets originating from the Oort cloud are called long-period comets since they take at least 200 years to complete one rotation around the Sun.

The comets originating from the Kuiper Belt are called short-period comets and they take less than 200 years to complete one rotation around the Sun.

Comets can be easily distinguished by their unique tail which trails in their motion. They are made up of mostly ice and dust particles. As the comet orbits around the Sun, ice starts to vaporize which appears as the tail. 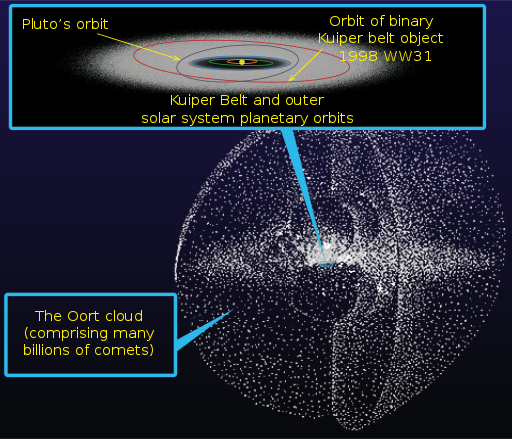 When the fragments and debris of Asteroids and Comets come towards the Earth’s atmosphere, we call them Meteoroids. In simpler words, when an asteroid or comets collide with some other space rock, they may become into smaller pieces. These smaller pieces are called Meteoroids.

When Meteoroids falling on Earth, burn up in the atmosphere, they appear as beautiful fireworks. These are called Meteor Showers.

The objects which come from beyond the kuiper belt and are massive enough to be shaped by their own gravitation but fail to attract objects near them can be classified as Dwarf Planets. Learn more about Dwarf Planets!

Any space object which passes within the 1.3 A.U or 120 million miles of the Earth are called Near-Earth Object.