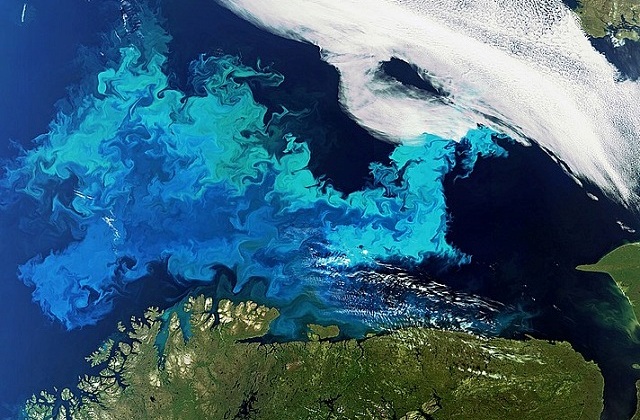 Where does the Oxygen on Earth come from?

Most of the oxygen on earth comes from the oceans. How do the oceans give us this oxygen, and why? To understand this, we have to go back to more than 3 billion years ago when the atmosphere on the earth barely contained any oxygen at all.

Nitrogen and carbon dioxide gases formed a major part of the atmosphere. Primitive life forms fixed their carbon requirements (source of food) without splitting water. This changed when a type of bacteria called cyanobacteria started fixing its carbon (into glucose) by splitting a water molecule, in a process known today as Photosynthesis. The byproduct of this process was Oxygen.

Early source of oxygen on earth

Cyanobacteria were able to multiply rapidly. In fact, they were able to multiply so rapidly that 2.3 billion years ago, they caused a significant change in the composition of the earth’s atmosphere, known as the Great Oxygenation Event or GOE. The levels of oxygen were still not as high as they are today.

A second rise in the amount of oxygen occurred around 800 million years ago, the same time as the emergence of phytoplankton in the oceans. It was around this time that animals were able to originate. The percentage of oxygen in the atmosphere was nearly  as it is today.

Overtime (millions of years) the cycle between oxygen consumption (By animals and fires) and oxygen production (by photosynthesis) has led to the steady accumulation of about 21 percent of oxygen in the atmosphere today.

Source of Oxygen from the oceans

Today, the great rainforests do not produce more oxygen than tiny phytoplankton in the oceans. This is due to the much greater number of phytoplankton as compared to trees. A single phytoplankton is so small that you cannot see it without a microscope, but they don’t grow individually.

They grow in groups called colonies, and serve as rich source of food along with producing oxygen. Some algal colonies grow so large that they can even be seen from space! The oxygen produced from phytoplankton outnumbers the percentage of oxygen produced by the forest. 70 percent of the total oxygen comes from the oceans.

Here are a few of the phytoplankton that serve as major oxygen sources:

Cyanobacteria: Cyanobacteria are single celled bacteria, but are commonly called as blue green algae and are included as phytoplankton. They produce about 50 percent of the oxygen from the ocean. Prochlorococcus is one of the prominent cyanobacteria.

Diatoms: Diatoms are single celled type of algae. They are single celled and are encased in a glassy cell wall made of silica. Since they contain, chlorophyll a and chlorophyll c. Diatoms produce the most amount of oxygen on Earth about 25 to 50 percent. This depends on seasonal variations in the oceans. They also serve as a very import     ant source of food.

Green algae: These microscopic phytoplankton are found close to land near the shores. Their contribution to the oxygen from the ocean varies according to the seasons.

Source of Oxygen from land

Around 30 percent of the oxygen in the atmosphere is produced from land plants and trees. Most of this oxygen is consumed by living things, insects, animals and by fires. The plants and leaves and branches that fall of the trees, decompose with the help of microbes that consume oxygen as well. Hence most of the oxygen that is produced by trees get consumed and there is no net addition to the total oxygen in the atmosphere. On the other hand, the oxygen released from the phytoplankton, is not all consumed and a major part of it is released into the atmosphere.