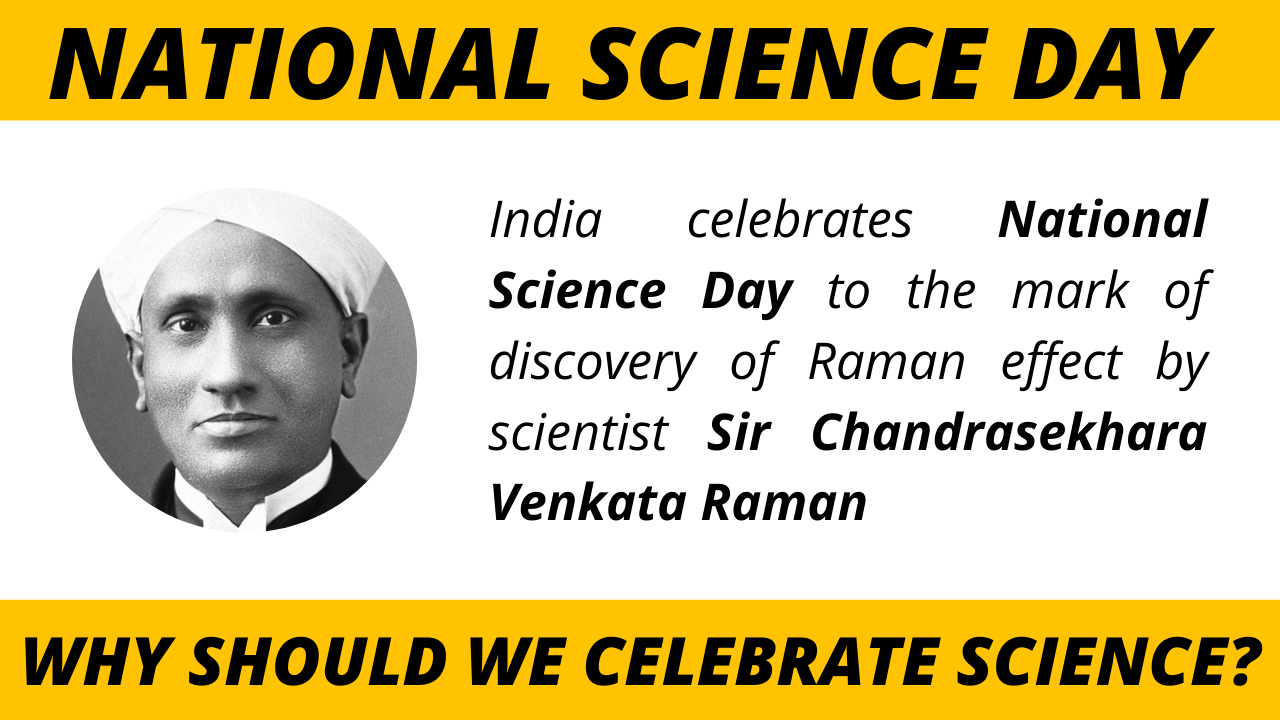 To celebrate The National Science Day 2022, we have written this article to answer some of the most interesting questions and topics such as Why should we celebrate Science? Why is National Science Day celebrated on February 28th ? How Sir C.V. Raman discovered the Raman Effect? How a ship journey helped to get a Nobel prize? And many more other interesting topics. Let’s get started:

Why should we celebrate science?

Science is the word that changed the life of the human race forever. It is the organized knowledge of all the things in the universe. From the ancient Babylonian calendar to the most advanced atomic clocks at NIST, everything is based on science. We humans have used science for our survival, well being as well to explore the most distant places on the Earth and also other planets. Thus, societies all across the world have to glorify the importance of science to coming generations of the human race.

Therefore, a day is dedicated to highlight the importance of science to our society and how scientists play a prominent role in understanding the nature of the universe and make our living sustainable.

Why is national science day celebrated on 28th February ?

“Integrated Approach in Science and Technology for a Sustainable Future”

Internationally, it is celebrated on 10th of November every year which was started by the United Nations Educational, Scientific and Cultural Organization (UNESCO) in the year 2001 and it was first celebrated in 2002 for the first time.

Chandrasekhara Venkata Raman was born on November 7, 1888 in Tiruchirapalli in Tamil nadu. Raman’s father was a teacher who taught mathematics and physics, Raman was very interested towards science from a very young age. He used to read the books of his father and as he grew older, he started borrowing mathematics and physics books from his father’s college library. He graduated at age of 14 in 1903 from Presidency College and he has planned on taking a master’s degree in physics. Even though their British lecturers encouraged him to pursue master’s degree in the UK but due to his poor health conditions, he had to continue his master’s degree at Presidency College.

During the first year of his masters degree,  Raman had written his first academic paper and got it published in Philosophical Magazine, it was titled as Unsymmetrical diffraction-bands due to rectangular aperture: it was related to the behavior of light. In 1907 he graduated with a master’s degree in physics with highest distinction.

After achieving his master degree Raman was forced to take civil service exams by his brother as their family was in deep debts and civil service jobs are highly paid jobs, Raman has made through the exam and joined as civil servant in 1907 in the Indian Finance Department in Calcutta and he rose quickly to a senior position.

He used to spend his free time at Indian Association for the Cultivation of Science to carry out his research in physics of stringed instruments and drums. In addition to his research he used to give lectures. His research work and lectures were impressive and has established him as a highly talented physicist, for which the University of Calcutta offered him the Palit Chair of Physics in 1917. He was just 28 and he accepted the offer by giving up the civil service job to dedicate full time to science.

A ship journey changed the course to Nobel prize:

In 1921, Raman travelled to Europe to attend the Congress of Universities of British Empire at Oxford. He conducted some research on acoustics and gave lectures at Physical Society on his research related to acoustics and optics. Raman on his return voyage to home, observing the magnificent blue color of the Mediterranean Sea which raised a question in his mind “ water in a glass has no color, but the sea with the same water is so blue. Why?

Earlier in 1921 a scientist called Rayleigh has explained and demonstrated that the sky looks blue in color because the light from the sun doesn’t reach the human eyes straight, but it is been scattered in all directions by the atmosphere and the blue light is scattered most by the atmosphere and it reaches our eyes from everywhere in the sky, so the sky looks blue. Also the red light is scattered more during sunrise and sunset so the sky and sun appears red. Based on this phenomenon Rayleigh said that the color of the sea is simply the reflection of the sky’s color.

Raman doubted that Rayleigh explanation of the sea appearing blue in color due reflection of sky is not true. He started conducting small experiments on the ship with his polarizing quartz prism which he used to carry always and demonstrated that Rayleigh explanation is false. He also showed that the intensity was different for the color blue in sky and the blue color in sea. In the voyage Raman sent two papers to the journal Nature, saying that the color of the sea was due to light scattering by water molecules.

After completing his fifteen day journey, he and his students started research on the idea by passing the light through different mediums like solid, liquid and gases to get scattered. Initially when they passed the light through the liquid they found the same color was emerging which proves the Rayleigh scattering of light.

Raman conducted further research to confirm the “A New Secondary Radiation” where the light of only one color was being passed through the liquid, but the light emerging has traces of another color (the molecules in the liquid were changing the color of light passing through it). This came to be known as Raman Effect.

The Raman Effect is a very small effect compared to Rayleigh scattering, it about 1 in a million of scattered light particles exhibits the change in wavelength.

In 1929 CV Raman honored with the knighthood and in 1930 CV Raman awarded Nobel prize for his work on the scattering of light and for the discovery of the effect named after him. He also became the first person from Asia to be awarded a Nobel prize in the field of science.

On the date of discovery February 28 was declared as National Science Day in India.