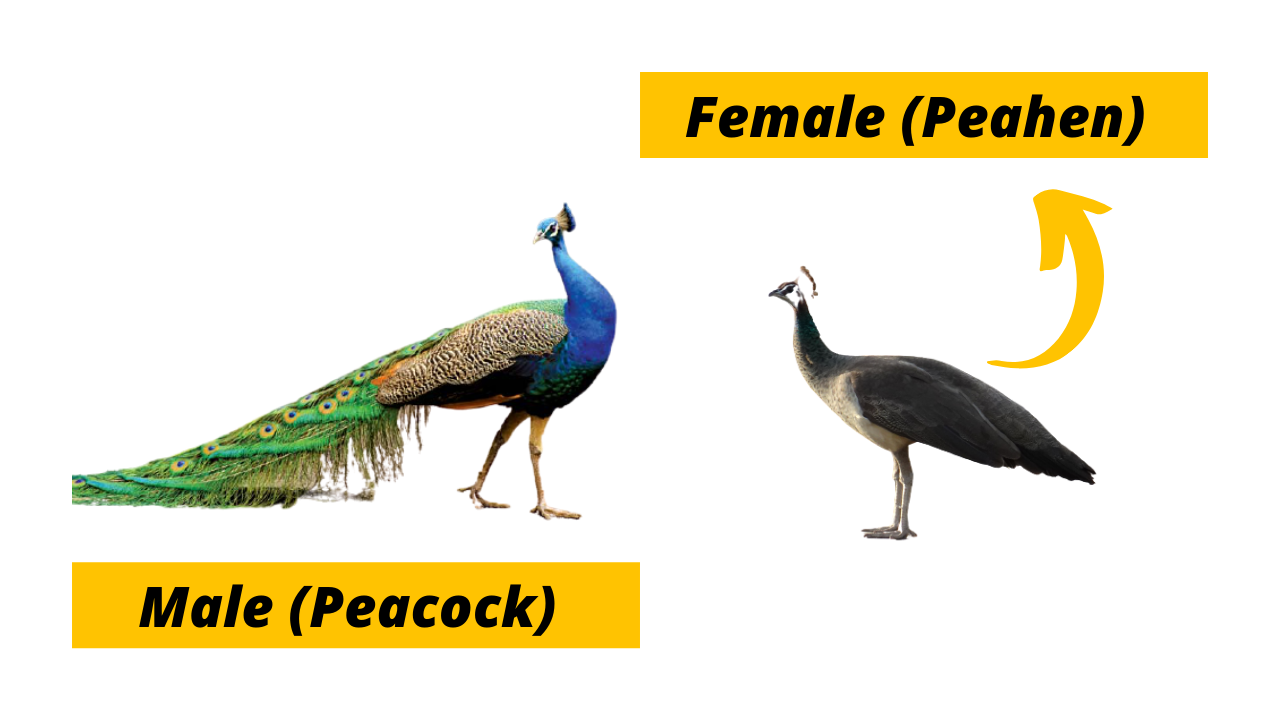 In polygamous species, Males are often more colourful and attractive than females. However, in some bird  species, the female is more attractive. Birds show a phenomenon called sexual dichromatism, in which both the sexes of the same species are coloured differently. In nature it has been found that in polygamous species in which one of the sexes is more in number (e.g male) and has to compete for a mate is more colourful, while the sex (e.g female) that has to take care of the eggs and chicks is less colourful.

In species where the males have to compete with other males for a mate (e.g.  paradise flycatcher) the males have brighter colors, longer feathers and are overall more attractive than their female counterparts. Though these bright and colourful features help the male to find his female mate, it also puts the male bird at a risk. His bright colors stand out against simple colours such as a green canopy or brown bark of a tree, and make him more visible to predators. Is having a colourful body to attract a female worth the risk of dying from a predator’s attack?

There are some traits that appear to be useful while also serving as a disadvantage. For example, In a duel between two antelope deer to win the chance to mate with the female, the deer with longer horns is more likely to win. If the same two antelope deer happened to be attacked by a cheetah, the deer with shorter horns would be more likely to escape and run away, while the deer with longer horns would probably not be able to escape, as it would difficult to run fast with longer horns, and the horns may get stuck in foliage.  This trait of long horns can be dangerous and hence natural selection should have eliminated this trait through the course of evolution, however due to the advantage that this trait provides in leaving more offspring behind, it is not eliminated. The reason why some males birds are more colourful than females can be explained similarly.

In some bird species, there is an abundance of males, and many males have to compete with each other for a single female. Those males which have  brighter colours are able to win the female over. In birds, such as a peacock, the dance and display of the feathers to the female of his species, may make him vulnerable to attack. If there are multiple males that are competing for a single female, only the male with a full display and attractive dance will be able to win the female over, mate, and leave behind their genes in the offspring. The other males, who do not, lose their opportunity to pass on their genes, and their genes die with them.

The bright colours of the males also indicate to the female whether the male is healthy and fit. In some species, some of the colours of the feathers are developed by the food that the bird has eaten and this is good indicator to the female, as she would know that the male would be able to provide food to their offspring. Males also use their colours to mark territories and signal to other birds that they have occupied a certain area and are healthy and willing to fight if need be.

Females are more coloured in some species

What female birds are more colorful than males? In bird species such as phalaropes, sandpipers and button quail, where the males take care of the nest and there are many females that compete with each other, the females are more brightly coloured.

Advantages of dull colours in birds

Not having bright colours has a lot of advantages. Females usually take care of the nest, the eggs and the young ones after they hatch. The drag colours help them blend into the environment such as the tree trunk  or the branch upon which the nest is perched. The dull colours help them to escape the eyes of the predators. The young ones hatched out of the eggs, irrespective of being male or female, have the same dull colours, The males develop their bright colours only later on in their lives. The young bird is unable to protect himself, and hence this a good protective strategy.

In colder climates, where the overall number of birds is few, males are not as colourful and sometimes even as drag coloured as females. The probability of standing out due to a bright colour against a brown or white background of a snow desert increases their chance of being attacked by a predator greater. The risk here is higher as they might be killed before they get a chance to mate.

Hence, male birds are not always more attractive than females across species. Males birds are more colourful than females in in species where there is male-male competition for a single female.

1 thought on “Why Are Male Birds (Often) More Colourful Than Females?”