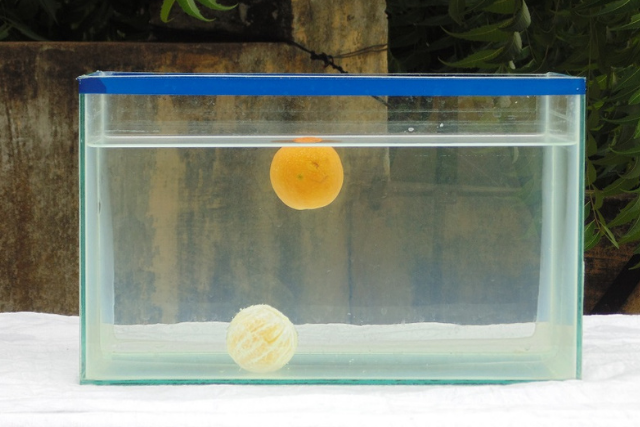 Orange Sink or Float Experiment: You might have noticed that some things float and some things sink in water. Why does this happen? What makes things either float or sink?

It is the density of an object that makes it either float or sink. Density is defined as mass (number of molecules) per unit volume. An object with more density sinks and an object with less density floats.

Using the Orange Sink or Float Experiment, we will try to understand more about the science behind What makes things either float or sink?

1. Take two oranges and a container filled with water.

3. Now remove the peel of an orange and place it again in water, you will see that it sinks to the bottom.

4. You will notice that the one with the peel is still floating while the other without peel sinks.

How Does It Work?

How do we compare the densities of objects?

Apart from density, there is one more factor that helps objects to float, that is Buoyant force. It is an upward force that is exerted by the fluid on the surface of an object. When an object is placed in water, the object displaces an equal amount of water of its volume. If the weight of displaced volume of water is equal to the weight of the object then the body floats, and if the body cannot displace the water of an equal amount of weight of the object then it sinks.

From the Orange Sink or Float Experiment we observed that the orange with peel will float. It means as the peel has air pockets it has more weight and it displaces more amount of water than its weight so the buoyant force is equal to the weight of the body so it floats. The orange without peel cannot displace equal water of its weight so the buoyant force is not enough to make the orange float so it sinks.

The bottom of the ship (hull) is made hollow so that it makes the ships less denser than water and also helps in displacing more amount of water than its weight which helps the ship to float. These two factors: density and buoyant force, makes the ships float on water.