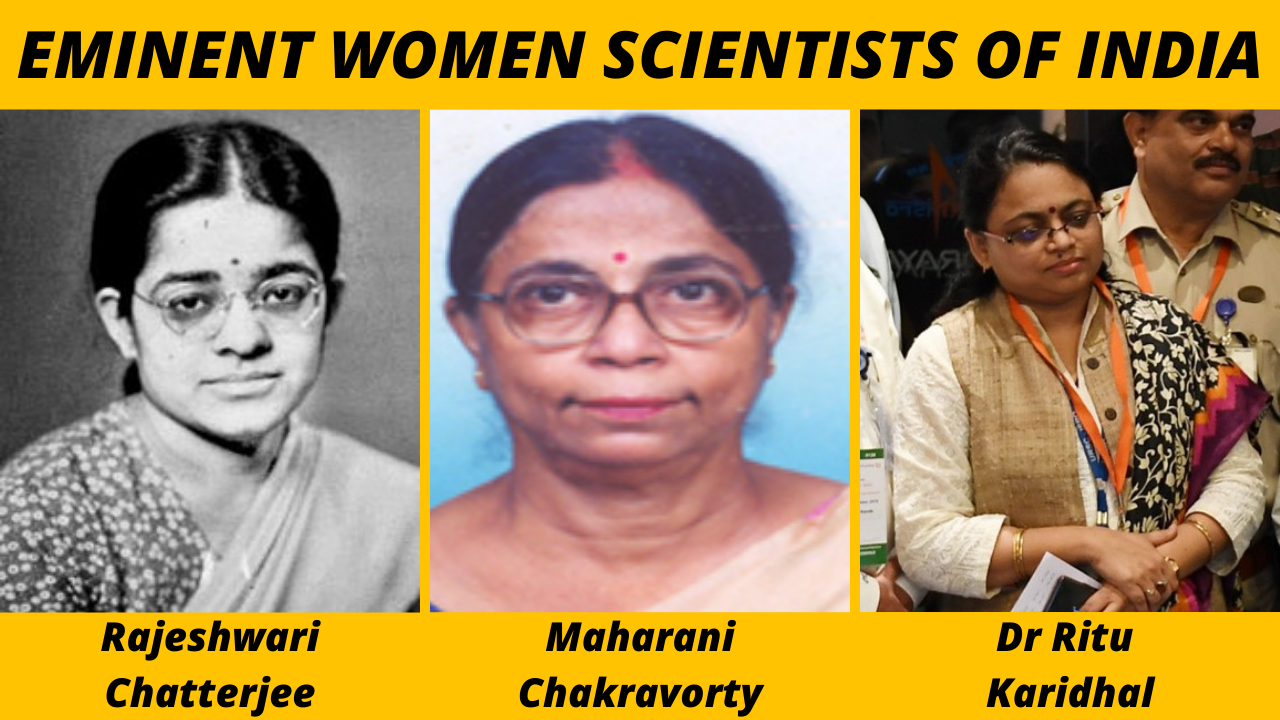 India has always been a land where science has flourished. For generations, Indian scientists have been able to answer questions pertaining to the darkest and deepest secrets of the Earth. India has always seemed keen to promote women in the field of science. These women, with their researches and exemplary work have been able to slam the social stigma that states that women are not supposed to work. Here, we bring you three such women, who with their great wits proved that if you put your mind up to something, there’s nothing stopping you. Lets learn about the Eminent Women Scientists Of India.

Dr Rajeshwari’s grandmother, Kamalamma Dasappa, a lady who was a pioneer feminist. She not only ran a special school for widows and deserted wives, she also played a major role in actuating Rajeshwari Chatterjee to pursue her higher education outside India. She earned her B. Sc (Hons) and M. Sc in Mathematics and Physics from the Central College of Bangalore, affiliated to the University of Mysore back then. She was the university’s gold medalist in both the examinations. After her graduation, Dr Rajeshwari Chatterjee joined SP Chakravarty’s lab at the Department of Electrical Technology at the IISc in 1943 wherein she worked on electronics and specialized in ultra-high frequency measurements.

While India was transitioning from a colony to a free state, the Government of India (interim) started a scholarship scheme in 1946 to facilitate eminent scholars to have an opportunity to study abroad. Rajeshwari Chatterjee was shortlisted for the same and was admitted by the University of Michigan to pursue master’s in Electrical Engineering. In 1947, she left for the United States by sea; taking 30 days to reach there. After pursuing her masters and PhD in the United States, Rajeshwari Chatterjee returned to India in 1953 and joined IISc again, but this time as a Faculty Member. Partnering with her husband, she set up India’s first ever microwave engineering research lab. The couple also introduced courses on microwave technology and satellite communication during the 1960s, being the first teachers of the subject in the country. During her tenure, she made sure to help students not only educationally but also helped sort problems in their personal lives. After having a successful career, Dr Rajeshwari Chatterjee finally retired in 1982.

Molecular Biology is a field that helps us understand how the basics of life work. Today, India has leaped way forward in the field of molecular biology; standing right beside the world in the field and this wouldn’t have been possible without the work of Maharani Chakravorty in the field.

Born in the small district of Bhagalpur, Bihar in the year 1937, Maharani Chakravorty showed an early interest in Mathematics and Science, following into the steps of her maternal grandfather. In her biography, she writes, “His narration of scientific discoveries always fascinated me.” After completing her Masters in Science, she joined the Bose Institute Kolkata to work under the guidance of Dr S.K. Roy. There, she met Dr Debi Prosad Burma who taught her biochemistry and under whose guidance she completed her thesis. Later, she married Dr Burma and the couple decided to shift to the United States post submission of her thesis.

Once the couple had shifted to US, Dr Maharani started getting her postdoctoral training in enzyme chemistry in the laboratory of B. L. Horecker at the New York University School of Medicine. While training, she had her first child but that did not stop her from pursuing her love for science. She started working back at the laboratory within a week of the birth. Even when she came back to India and joined the Bose Institute as Council of Scientific and Industrial Research (CSIR) officer, she’d carry her child with her to the laboratory. Her devotion towards her work and the way she managed being a working professional and a parent is something we could all learn from.

Her best work came in the field of Bacteriophage, a medical practice of killing bacterial infections with the help of a virus. Her work showed the path to progression in the fields of mapping, sequencing and cloning of bacteriophage. In recognition of her contribution to science and humanity, Dr Chakravorty received a number of awards including Kshanika Oration Award (1979) which is given to meritorious women in the field of Biomedical Sciences. Her other awards include YS Narayan Rao Award (1981), JC Sengupta Memorial Award and Professor Darshan Ranganathan Memorial Award (2007). Even though she bid adieu to the world in 2015, her work remains forever immortal.

Dr Ritu Karidhal is a senior scientist at the Indian Space Research Organisation (ISRO). Born on 13th April 1976 in Lucknow, Dr Ritu is the oldest amongst the four siblings. Brought up in a middle-class family, Dr Ritu’s parents paid huge emphasis on her education right from the start.

As little Ritu grew up, she started showing interest in space studies. She used to collect the cuttings of newspaper articles involving NASA and ISRO and all other space related activities.  Maths and Physics always fascinated her and she’d spend her nights trying to get to know the stars better. Dr Ritu completed her Bachelor’s in Science from the Mahila Vidyalaya PG college and MSc in Physics from the University of Lucknow after which she pursued her doctorate in Physics under the guidance of Professor Manisha Gupta. While she was still in the middle of her doctoral research, she took the Graduate Aptitude Test in Engineering(GATE) and cleared it with flying colours. She got a chance to pursue M. Tech in Aerospace Engineering from the Indian Institute of Science (IISc) in Bangalore but the dilemma was that she had to leave her PhD in between. She was encouraged by her mentors and her parents to join the IISc and she did the same.

While she was still at IISc, she continued with her fascination for the stars and space. She was constantly on the lookout for job opportunities at the ISRO and kept applying. As her M. Tech came to an end, she was able to land a job at the ISRO in 1997. Dr Ritufrom the very first day impressedeveryone at the centre and showed signs of a great future. In 2012, she was appointed the Deputy Operations Director for India’s Mars Orbiter Mission (M.O.M) called Mangalyaan-1. She was lauded for creating the craft’s autonomy system, creating it in a record time of 10 months. The Mangalyaan-1 was officially sent into the space on 5th November 2013 and has been a huge success for the country, as it has continued to orbit Mars since 24th September 2014. Her team, that comprised of women scientists just like her, was lauded with the title “Rocket Women of India”.