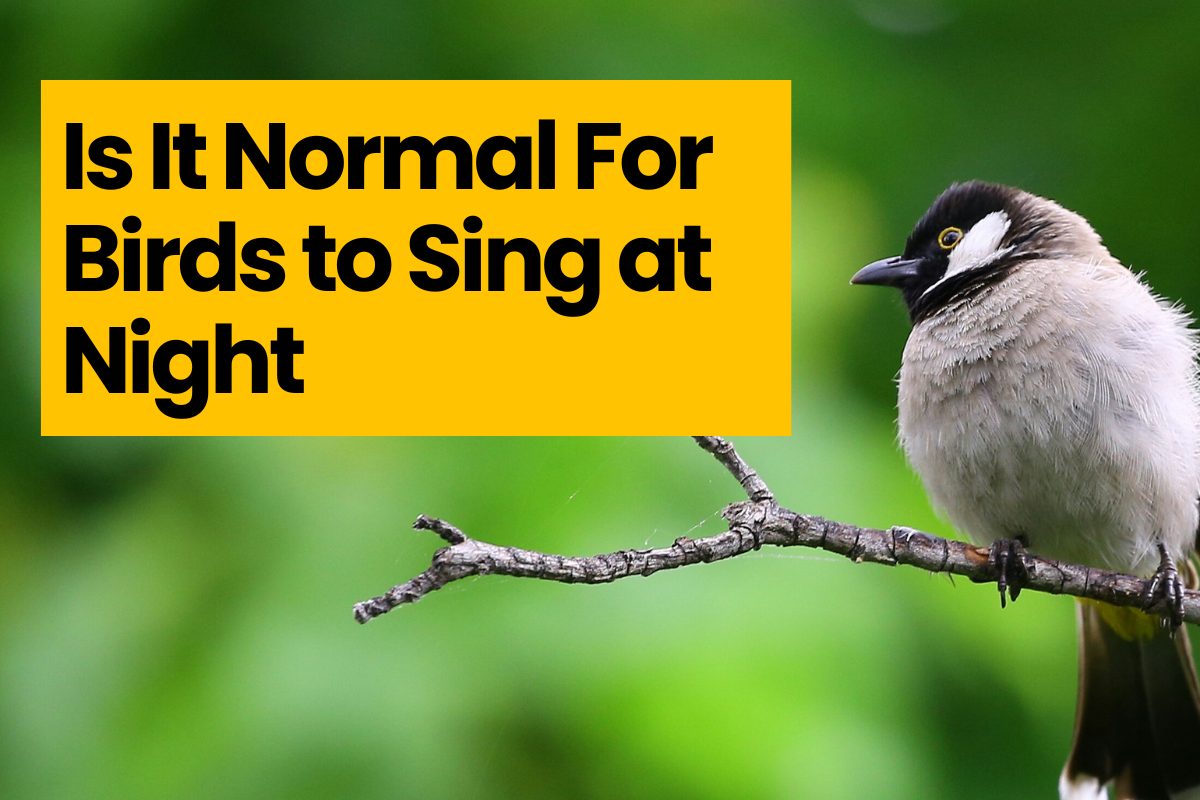 It is common for everyone to listen to the adorable sound of birds chirping in the daytime. In the daytime, these sounds are delightful and admirable for anyone to listen to, but when it comes to night, it often becomes irritating for most people. When birds chirp at night, many people get disturbed and distracted.

There are several stories to justify why do birds Chirp at Night? But, a few reasons for birds chirping at night are defined by science for this.

Why Birds Sing at Night ?

To Find Their Partners

One may notice some birds chirping in the dark, and they must be looking for their partners, and this is one of the ways to find them. And it is a known fact that, in general, there are male birds who do this act of chirping at night to find their female partners.

It can be done by diurnal birds and also even nocturnal birds. It’s essential to note that birds chirping at night is among the most common bird facts for kids.

The next reason why birds chirp at night is due to disorientation. Most birds are seen being active and chirping in the daytime. But, when they come in contact with light in the nighttime, they get confused and start chirping. It happens mainly in the cities, and one can notice this very rarely in the villages.

In the big cities, there is always the noise of vehicles and everything, and so birds find it uncomfortable to chirp. It is also the reason they chirp at night time.

As a Warning Signal

The next reason for birds chirping at night is due to some danger to them or their fellow birds. They chirp as a warning signal when they are aware of the threat, and they also do this to make the other birds aware.

The dangerous situations can be some sudden sharp noise from somewhere that they sensed, it also can be some big birds turning towards them to attack them or their kids, it can also be some light that is so sudden towards them that makes them feel scared and much more.

In these sorts of dangerous situations, birds chirp very loudly and continuously. Due to this, humans may feel irritated, and they may get up from their sleep. When they are chirping, and other birds are awake, they also start chirping along with them, and the sound increases. When any predator comes towards them to harm them, they get scared and leave, and the birds are safe again.

In general, it is seen that most of the time, birds fly and look for food in a group along with the other birds. In the evening, everyone returns to their places, and then in the night light, when these birds are not finding any birds with them, they start chirping to find them.

It is a very interesting way for the birds to call their fellow birds or to show them the right direction to themselves. When the lost birds listen to these chirping, they go in that direction, and with the help of those chirping sounds, they find everyone.

If someday, in the night light, there is any sound of birds chirping, it can be the reason that they are finding their other birds.

Excitement for the Food

However, it can also be why other birds are snatching their food and quarreling for food. It is also when these birds start chirping.

To Practise the Songs

It is also a reason for birds chirping at night light; they all practice their songs, and therefore, everyone listens to the chirping sounds. However, when birds sing songs, the sound is very soothing to the ears, and one can find it very pleasant.

When someone listens to the birds chirping, it is tough to distinguish whether it is a baby bird or some adult bird. It can also be that baby birds are chirping at night, and they can chirp for many reasons. It can be for food, the attention of their parent birds, some danger, and several reasons.

It is generally believed that birds chirping at night is done by some nocturnal birds, such as owls. But this is only true sometimes. There are other birds too who can be seen in the daytime, and there are several reasons for this. Some birds do this act because they are trying to find their partners, some birds do it because they feel some danger towards them or their kids, and much more.

Disclaimer: The views, opinions and thoughts (including content in any form) expressed in this post belong solely to the author alone. Starry Stories does not guarantee the accuracy, completeness and validity of any statements made within this article. If you have additional questions or require more information, do not hesitate to contact us.