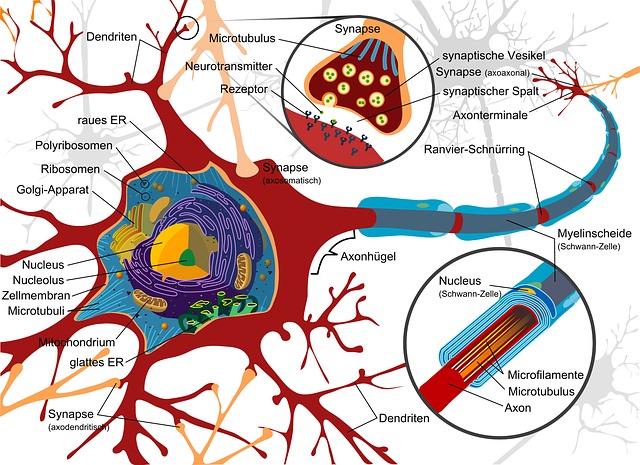 Before we try to understand the Autonomic Nervous System, let us look at the meaning of the following terms:

Neuron: A Neuron is a specialized cell of the nervous system that transmits impulses.

Sensory Neuron: These Neurons are responsible for responding to stimuli, converting the response into electrical impulses and then transmitting the impulses to the brain or spinal cord.

Motor Neuron: These neurons are responsible for transmitting the impulses from the brain or the spinal cord and bringing about the desired activity in response to the stimulus.

Ganglia: It is a structure that contains a collection of large number of cell bodies.

Spinal cord: The Spinal cord extends from the brain and is a long tubular structure of nervous tissue that extends through a major region of the vertebral column in humans.

Homeostasis:  It is the tendency to maintain a stable and relatively constant internal environment in the body.

ATP– Adenosine Tri Phosphate, it is primary carrier of energy required to carry out metabolic activities in the cell

The Autonomic Nervous System is responsible for controlling the internal environment of the body. It does this through receptors in blood vessels, visceral organs, muscles etc. The motor neurons of the autonomic nervous system control or regulate activities by either increasing or decreasing the ongoing effects of their effect or tissues.

The autonomic nervous system is further divided into two parts called the Sympathetic and the Parasympathetic division. These two divisions bring about effects that are opposite to each other, and together work to keep our body in a state of homeostasis.

1. Dilation of the pupils.

3. Dilation of the air ways to allow more of air to enter the lungs.

4. Constriction of the blood vessels that supply the kidneys and the gastrointestinal tracts, so that these regions receive less blood flow. This happens so that there is a decrease in urine formation and decrease in digestive activities, which are not required during the “E” situations.

5. Dilation of the blood vessels that lead to skeletal muscles, cardiac muscles, liver and adipose tissue so that these regions receive more blood flow. This happens so as to allow physical activity.

6. The cells in the liver work to breakdown glycogen into glucose, and the adipose tissue cells breakdown fatty acids to provide a ready supply of energy.

The Parasympathetic Division of the Autonomic Nervous System is also called the ‘rest and digest’ division. It is called so, because it involves activities that conserve and restore energy during times of rest or while digesting a meal. Hence, a major part of this division brings about effects in the gastrointestinal and respiratory tracts through smooth muscles and other glandular tissues.The following effects during the period wherein the parasympathetic division is active are seen; Salivation, Urination, Digestion, and Defecation. The Parasympathetic Division is also involved in decreasing the heart rate, decreasing the size of the airways and decreasing the size of the pupils by constriction.

The third part of the autonomic nervous system is the Enteric Nervous System, often called the ‘brain of the gut’. The enteric nervous system consists of a collection of nerves and ganglia all around the gastrointestinal tract, pancreas and gallbladder. The ENS is under the control of the CNS through the sympathetic and parasympathetic division, but, this enteric division can keep functioning without any inputs from the central nervous system. This is because the sensory neurons sense signals regarding the tension in the intestinal walls and composition of the intestinal contents. These sensory neurons then relay this information to interneurons which are located within the enteric ganglia itself. They then process this information and send the output to motor neurons throughout plexuses which are situated within the walls of the digestive organs. The ENS functions to maintain intestinal motility through regulated contraction of GI tract muscles, fluid transport and handling nutrients.

Disorders of the Autonomic Nervous System.

Neuropathy is caused due damage of the nerves or dysfunction of the nervous system. Autonomic dysfunction may occur due to diseases such as Diabetes or Parkinson’s Disease. The symptoms of autonomic dysfunction include feeling of dizziness, irregular heart rate, blurry vision due to inability of pupils to react to light conditions etc. The high level of glucose in Diabetic conditions causes damage to the nerves, which leads to Diabetic Autonomic Neuropathy. These diseases are not curable, however their progression can be slowed.

2. Read about the The Secret Lives of Tardigrades