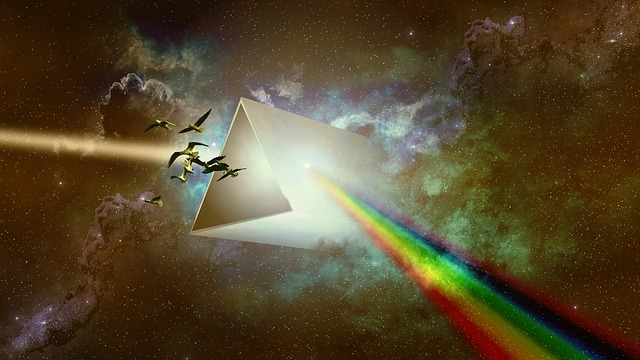 Refraction of Light: Have you ever wondered that the objects placed under water appear to be in a different manner than they actually are, mostly we have observed that the things inside water will be bigger in size. For example a lemon placed in glass filled with water, a fish in a round water bowl, red color of sky during sunrise and sunset. Why are they actually looking different as they are placed in water or under a glass slab, what is responsible for these changes?

It is all due to the light that is travelling between two different mediums. Earlier you have learned about the reflection where the light returns/bounce back into the same medium, irrespective to any surface. In this topic we consider that light travels through the medium which makes the difference. As the light travels from one medium to another medium, the light ray bends. This bending phenomenon of light is known as Refraction.

What is this medium?

What is this medium and why this change in medium is responsible for bending of light ray?

The substance surrounding a source of light through which light travels is Optical medium, we have two types of mediums: one is optically rarer medium and optically denser medium.

For example consider two mediums one is air (optically rarer ) and other medium as transparent glass (optically denser), when the light incident on the glass surface, it tries to pass through the glass. In this process the light when it is entering into the glass, light starts interacting with the glass molecules and these molecules starts absorbing the energy of light which results in decreasing of speed of light and seems to bend from its original path. 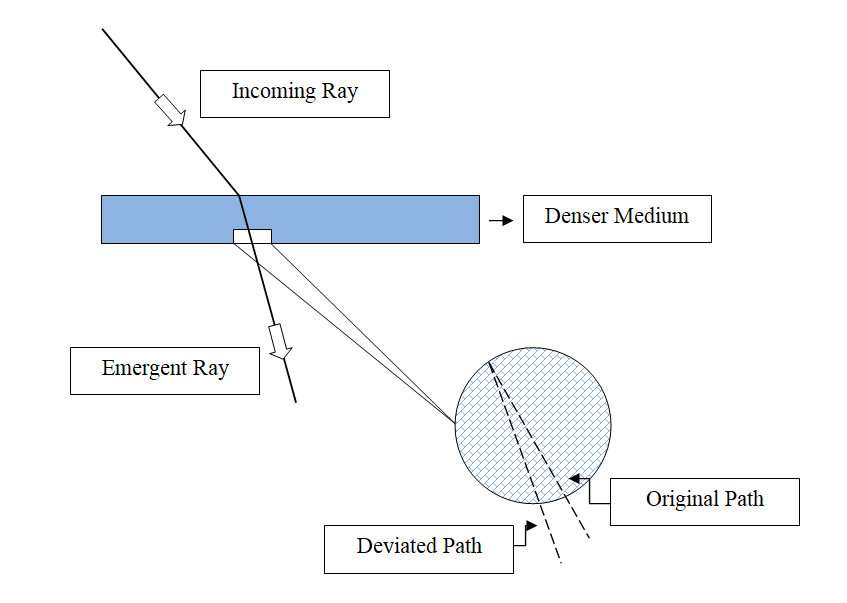 As we see that light passing through the mediums it bends. How does it bend and in what direction its bends, does it always bends in one direction and can we observe that the light can bend in whatever angle the light had incident on the surface? 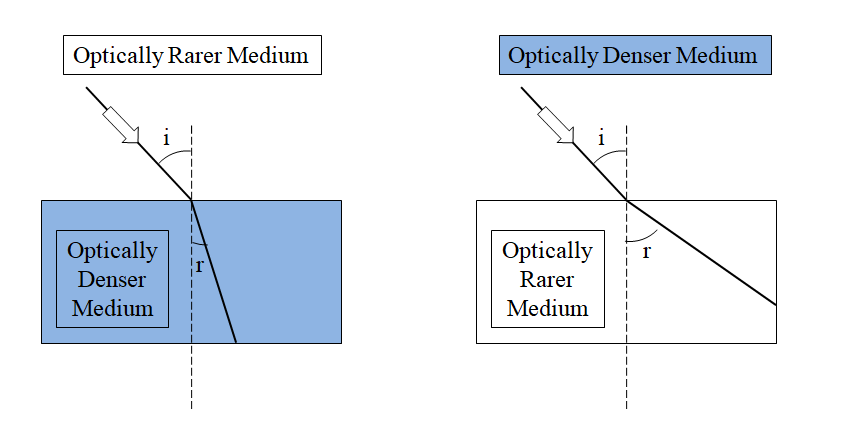 After knowing the direction of light, to determine till what extent the light bends from the normal is known by “Refractive Index”. It is the ratio of speed of light from rarer medium to speed of light in denser medium. It is represented by ‘µ’ or ‘n’.

If the speed of light is compared between vacuum and any medium i.e, known as absolute refractive index 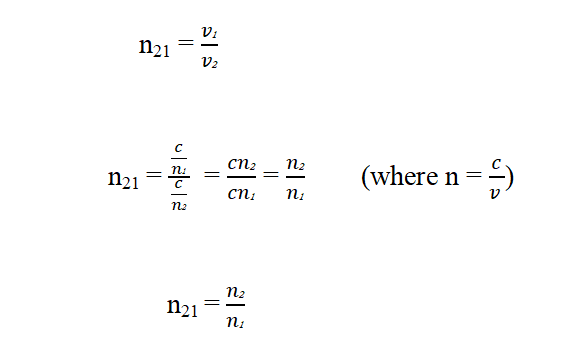 From this wave equation we say that velocity and wavelength are dependent of medium and where as frequency is independent of nature of medium it depends on the source alone. 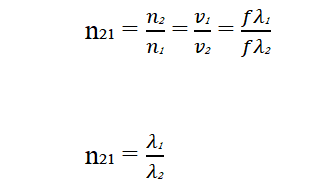 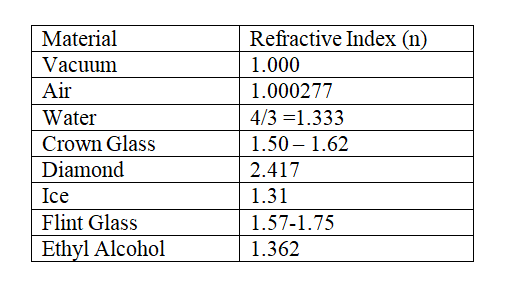 Ist Law: The incident ray, refracted ray and the normal to the surface separating the two mediums at the point of incidence, all lie on the same plane.

IInd Law: The ratio of sine angle of incidence to the sine angle of refraction remains constant for given pair of media and for a given color of light. This law is also known as Snell’s Law. 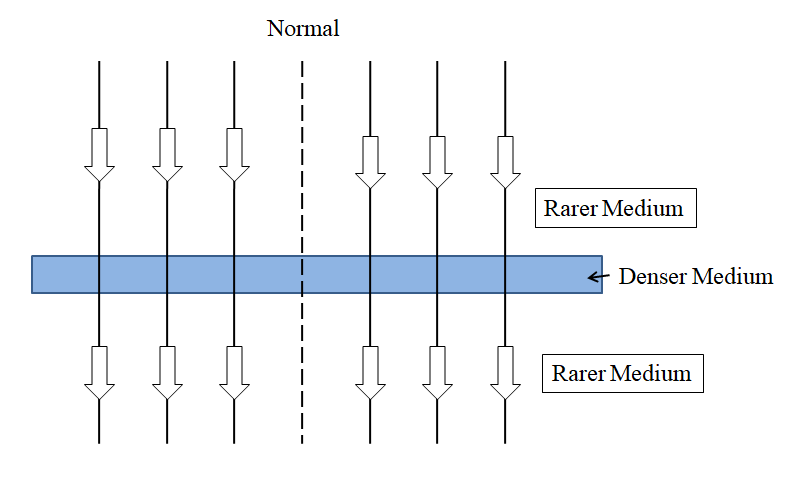 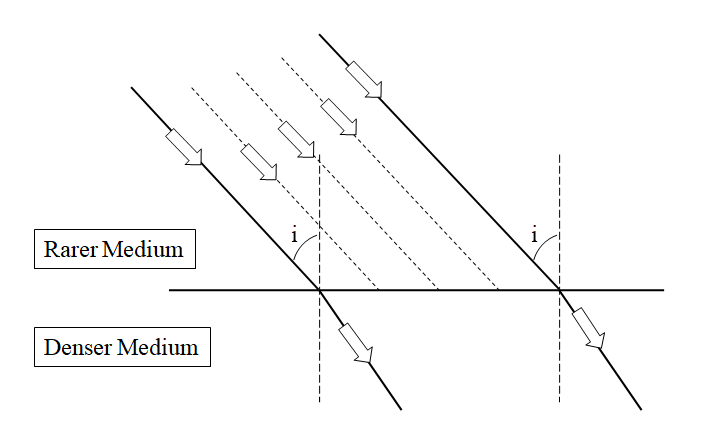 It is clear from the above figure that the first ray meets the surface while the other rays are still travelling in air. Now considering the first and last ray eliminating the rays in between, as the first ray enters the second medium and gets refracted (the velocity of 1st ray decreases v2), the last ray is still travelling in the first medium with greater velocity v1 than the 1st ray. Now draw the normal ray with respective to the surface that is separating the two mediums and also draw the normal line from the 1st ray and that normal line intersects the last ray at some point. 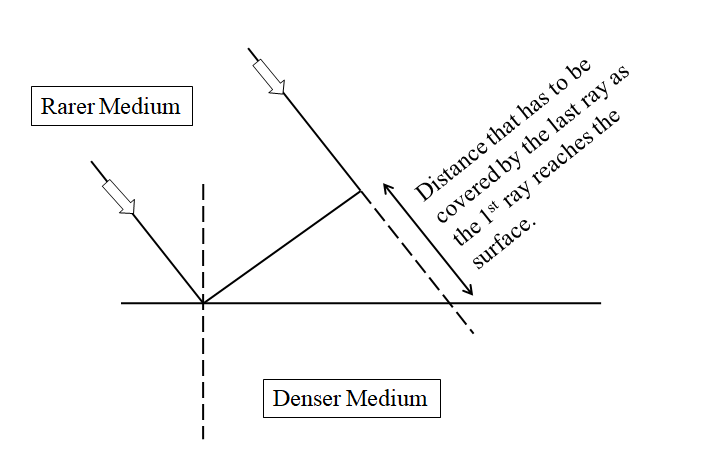 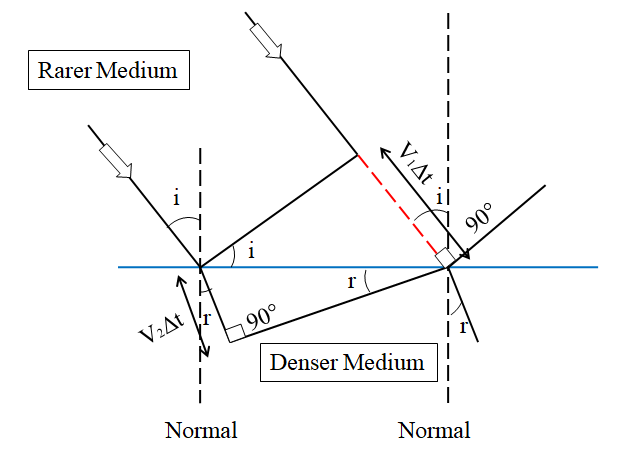 In the above we have similar triangles, with a common hypotenuse we can write in the terms of sine 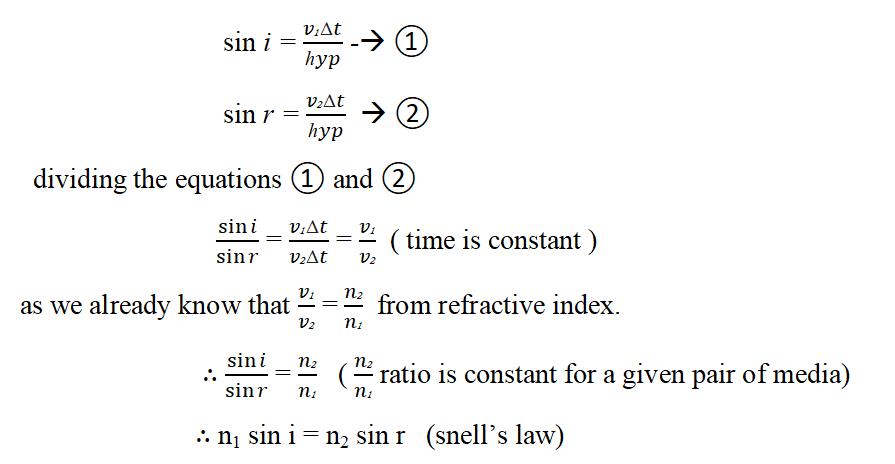 Principle of reversibility of light 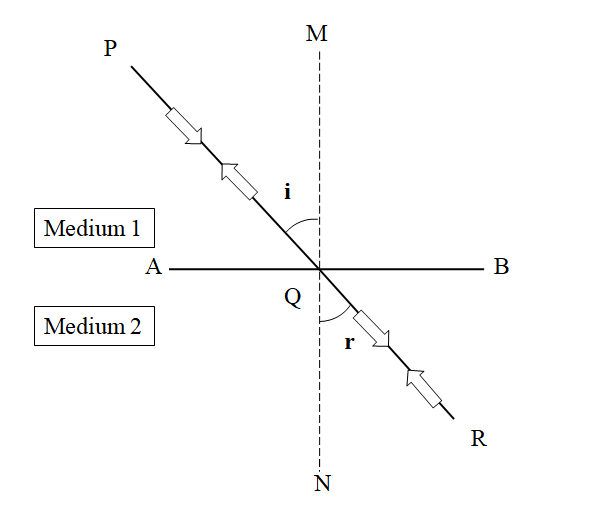 similarly when the light path is retraced, refractive index of medium 1 with respective to medium 2 is given as

this equation can be written as reciprocal of n21 which is

Consider a rectangular glass slab of thickness ‘t’, if a light ray incident on one of the side of glass slab with an angle i with respective to normal, the light ray normal and makes an angle r.

The lateral displacement depends on

Thickness of medium: lateral displacement is directly proportional to thickness, as the thickness increases shift of light also increases and vice versa. 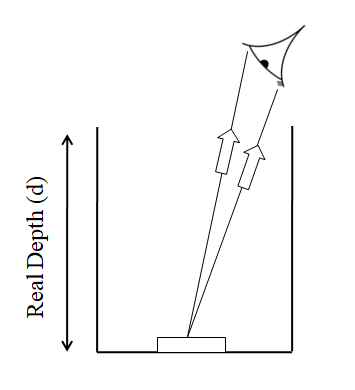 Now fill the glass tumbler with water and you will see the coin raised from its original position. This new position of the coin is the virtual image of the original object, and this height of the virtual image from the surface of the medium is apparent depth d’. 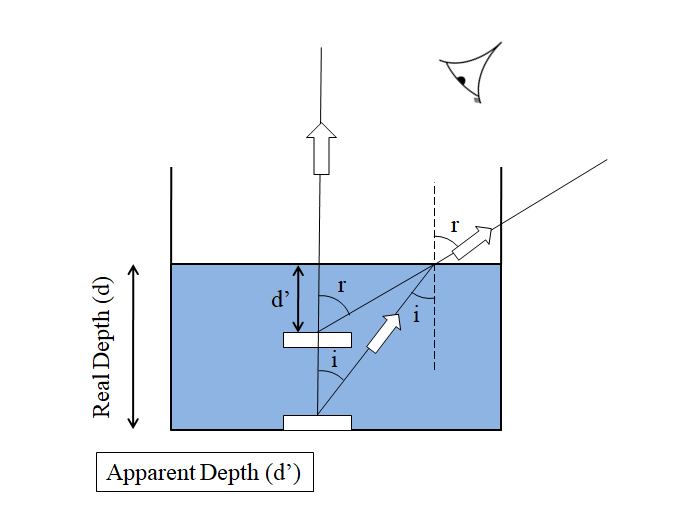 Both d & d’  are measured from the surface, which separates the two media.

Daily life example sun appears before it actually rises, and sun appears after the sunset.

If still the angle of incidence increases beyond the critical angle, the light cannot pass through the dense medium and gets reflected back into the same medium. This phenomenon of complete reflection of light into same medium is Total internal reflection.

Mirage: The optical illusion of appearance of water without its actual presence is known as mirage. During a hot sunny day, the earth surface gets heated up. Due to this, a layer of air just above it gets heated and becomes less dense than the air above it. Light travelling from a distant object or a tall tree passes from high refractive index i.e., denser medium to layer of lower refractive index i.e., rare medium, which makes the light ray to refract more and more and moves away from the normal till the angle of incidence is equal to critical angle. As the angle of incidence is greater than critical angle, light gets total internal reflection and the person who observes this reflected ray sees the optical illusion of appearance of water.

Twinkling of stars: Stars appear to twinkle due to the atmospheric refraction. Light from the stars undergoes continuous refraction as it enters into the earth’s atmosphere. As the refracted ray bends towards the normal, stars appears slightly higher than their actual position. The apparent position of star changes slightly due to the change in the earth’s atmosphere, as the position of the star fluctuates. Stars appeared to twinkle.

Moon or a planet does not twinkle as it appears bigger than stars and also the moon and planets can be considered as collection of large number of point sized objects which nullify the twinkling effect.

Many more applications of total internal reflection like formation of a rainbow, diamond sparkle, optical fiber which transmits the data.

Chanukya is an engineer turned educator who currently teaches physics for high school and college students.  His motive is to enhance the knowledge of students by unraveling the laws of nature in a lucid manner. He believes that small steps towards the world of physics will make huge leap in the field of physics.